There's only so much to be learned by reading about or even listening to someone else conduct a Jobs to Be Done interview. You gotta get out there and put the theory into practice yourself.

That said, you can do some things to prepare yourself for success and this post provides some tips and tricks to allow you to do just that.

Internalize the Forces of Progress

Keep the Forces of Progress model top of mind as you’re conducting your interviews. If this Forces model is new to you, hop over here real quick and watch the short video I’ve provided.

It might even be helpful to draw a blank grid on a separate sheet of paper and note the points in the interview that surface each of these forces. I have typically done this during a post-interview debrief with my interview partner, but there’s no reason you can’t do it as you go along.

First, a couple of tips to keep in mind as you begin your interview, and then we’ll talk about the most important tool, The Timeline.

Tip One: Pretend the stakes are low. Even if they aren't.

Open the interview by explaining that you’re in the very early stages of doing some low-stakes customer research on your service.

Even if you’re in the late stages of an extremely important initiative, its important that the interviewee not feel any pressure about their answers. They need to be relaxed and feel comfortable just sharing their story.

Make this clear: “The stakes are low, some details will end up being important, others won’t. What’s most important to me is to hear the story of how you ended up signing up for our __.”

Tip Two: Establish a documentary metaphor for how the interview will unfold.

Tell them to imagine that you’re shooting a documentary, so you want all the details around what lead them to make this decision. No detail is too small or silly, everything from the first time they thought about making the purchase to the weather outside when they bought. It’s all important.

Tip Three: Listen for, and follow the emotional energy in their story.

As the interview unfolds, the person will typically start to relax a little bit and will even begin to have fun. If you’re doing a good job of remaining engaged and genuinely interested in how all of this unfolded for them, they’ll really start to open up.

People generally love talking about themselves and you’re giving them your undivided attention! As that happens, you’ll notice that certain parts of the story cause them to really light up with excitement, annoyance, or any number of big emotions. Follow those threads, there are insights hidden along the way!

Ask them to level you up or help you understand something.

Even if you’re pretty sure you know why they just said the thing they did, play dumb about it. “I’m sorry to ask you to repeat this, but can you help me understand that a little better? When you just said that one service was offering lawn aeration and the other wasn’t, what does that mean? What is aeration?”

Pretend you don’t know the first thing about your own product so that you aren’t bringing in any of your assumptions about why customers hire it and you’ll be more likely to discover the real reasons that people do.

Tip Five: Once or twice, retell a detail wrong on purpose.

Don’t overdo this, because you want the person to feel like you are hanging on their every word and paying close attention, but once or twice, when you summarize a “scene” from their story, get something wrong on purpose. Sometimes, in correcting you, it’ll jog another little detail or it’ll give you a natural segue to ask for a little more context on why that particular thing was important.

Start with those tips, and after a while, they’ll be so natural that you don’t even think about it. But at first, it’ll be good idea to have those discreetly hidden away on some notes.

As for what to ask after you’ve set up the documentary metaphor, my friend and interview partner, Jason and I walk in to each interview with just one question: “So tell me about how you came to purchase ___.” After that, let them talk, and start following the threads.

As you follow those threads, you’re trying to fill in the gaps of this outline:

Most purchases tend to roughly follow this sequence of events. Something happens that causes someone to think, “Hm. You know, it might be time for a new pair of skis.”

That’s the First Thought and that prompts them in to what is called the Passive Looking phase. They aren’t deliberately visiting any outdoor retailers to look around, but if the sport comes up in conversation with a group of friends, maybe they’ll ask, “So, what type of ski are you on these days?”

Then something else significant happens that kicks them in to Active Looking. In the JTBD Timeline used by most practitioners, this is very unceremoniously referred to as, Event One, but it’s important to note that this is not literally one event. Your customer might note a number of events that occur during this phase of Active Looking, but typically there is a touchstone event during this series that triggers them from phase to phase.

In the Active Looking phase, they’ve pretty much settled upon the idea that they’re getting new skis and they’re out in the market with a very wide angle lens, looking at and taking in all that is available to them.

Another event comes along that we call, you guessed it, Event Two, and now the customer is in full on Deciding mode. They’ve narrowed their vision back down to a very limited set of options and one of these select few remaining choices is very, very likely to be the solution they choose to hire.

And so, this is what you’ll want to draw on a blank sheet of paper before you begin your interview. 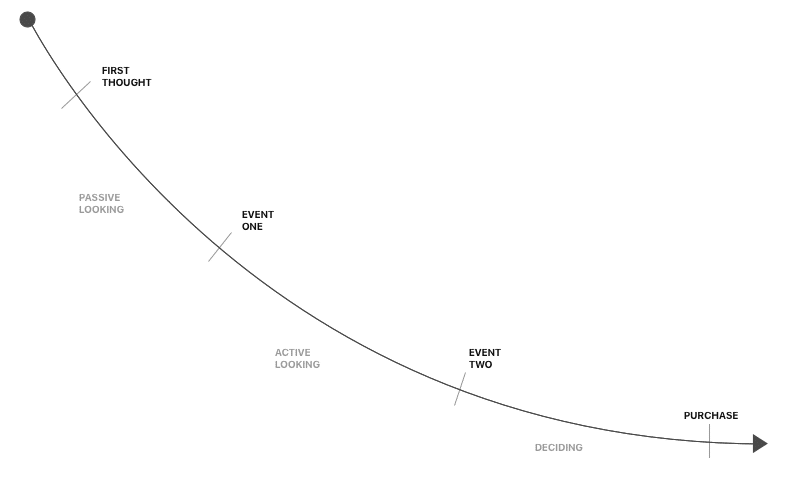 Draw a line from the upper left to the lower right, put in four ticks along the way for First Thought, Event One, Event Two, and Purchase (or Non-consumption).

As you conduct your interview, you’ll uncover significant pieces of the story and can begin to attach them to the timeline. By the time you’re done, you should be able to retell their story in about thirty seconds, highlighting the first thought, event one, event two, and finally the moment of purchase.

Scattered along the way you should hear some moments signifying Push, Pull, Anxiety, and Habit; and buried within it all is the core job they’ve hired the product to do, the underlying progress they’re hoping to make in their life.

Do a Dry Run with Headphones

If you’re feeling a little nervous about doing your first interview with a customer, then just try this:

Take notes as if you’re conducting the interview. Listen closely to what the customer is sharing and consider what questions you might have asked if you were in the room. What energy do you hear and what insights might you have wanted to dig into a little further?

Do these dry runs a few times if you need. And, if you’re still feeling hesitant, ask a co-worker, friend, or your partner if you can interview them about a recent purchase of more than $50. Repeat purchases and low-dollar items aren’t a great place to begin because it’s less memorable and less meaningful. As you’re getting comfortable with this framework, you want to start with big purchases.

Ok. There you go. An overview, some tips, tools, and links to get you started. Get out there and Get to Know Your Customers!

When someone is deciding between sticking with their current solution or switching to a new offer, they find themselves weighing their decisions against the forces of Push, Pull, Anxiety, and Habit.

Jobs to Be Done Framework on the Product Popcorn Podcast

In this post, I’ll show you step-by-step how I’ve used the approach described in Tony Ulwick’s book, "What Customers Want" to help my clients get a much better handle on what to build, what to improve, what to leave alone, and what to ignore.

How to Write Jobs to Be Done Example Statements

If you're trying to integrate Jobs to Be Done into your design process, you've probably found yourself looking for some concrete examples of Jobs to Be Done statements to be sure you're on the right track.