Do you find yourself in a market with a long-standing, dominant player, and you’re wondering:

“Are these folks susceptible to disruption?”

Or, maybe you’re trying to get a handle on what all this disruptive innovation talk is even about.

What is disruptive innovation and what is just good old fashioned and perfectly noble “somewhat better than the thing we had before?”

There are two types of innovations: sustaining innovations and disruptive innovations. “Sustaining Innovations” by another name might be described as “Feature Creep.”

Then there are inevitable feature requests and well-paid VPs who need something to show for their year! So, they tack on a feature here, a doo-dad there, and before you know it you’ve got a five-bladed whisker removal device with a pivoting head, lubrication strip, and “microfins” to gently stretch your skin as you shave. 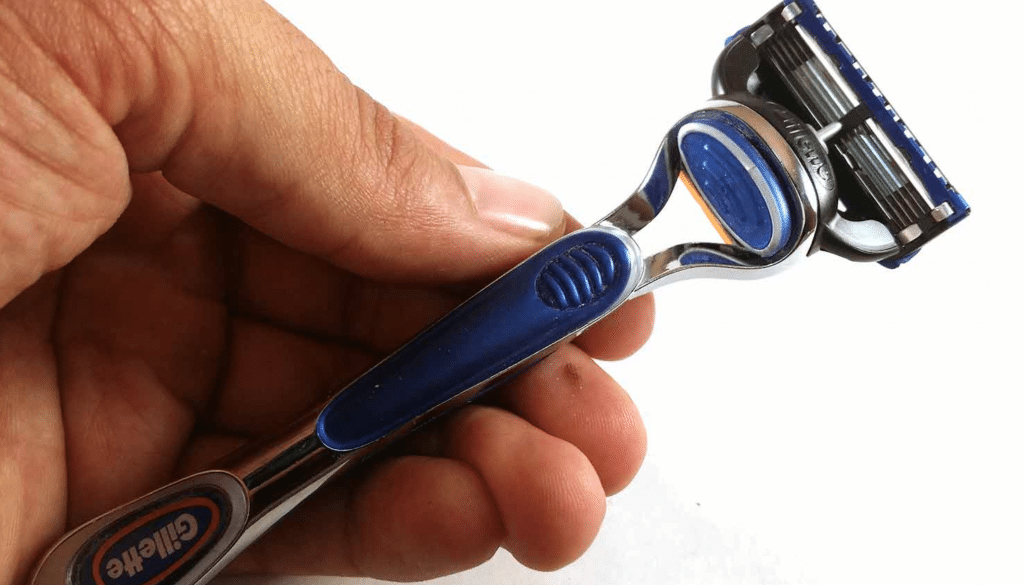 It isn’t that any one of those improvements was a bad thing. It’s just that it may not be entirely necessary or even noticed by the customer.

Interestingly, Mad Magazine predicted and poked a little fun at the over-implementation of shave tech back in 1979. 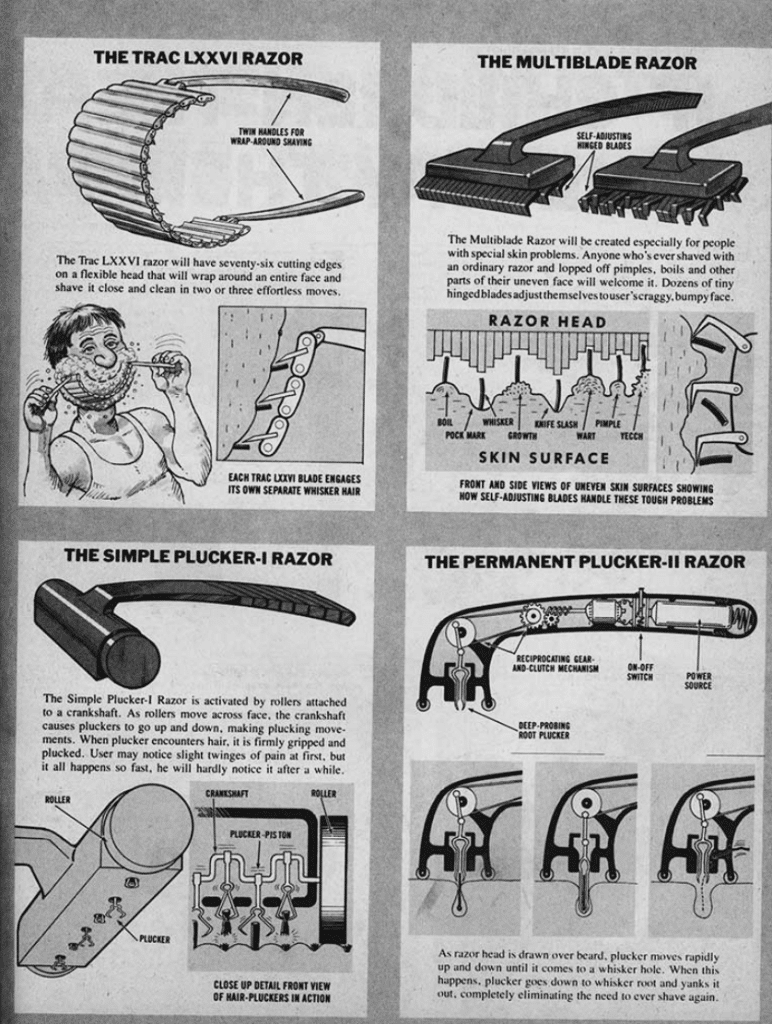 Anyway, those little additions are sustaining innovations moving the blue line a bit up and to the right as time moves along. 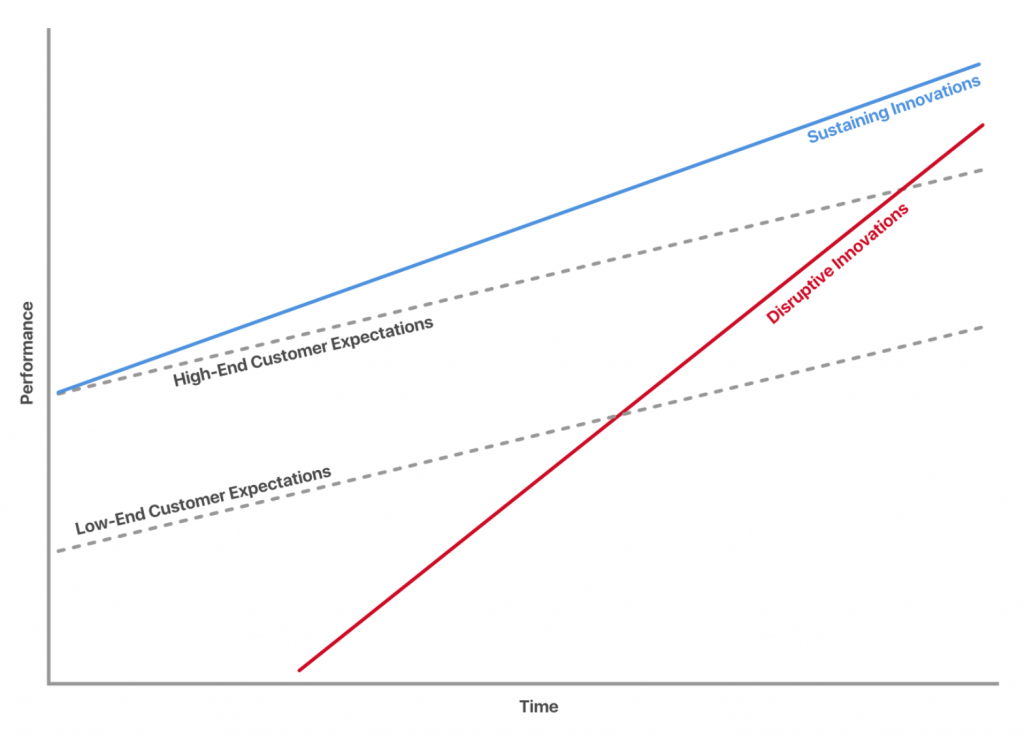 But then, something interesting happens. Someone comes along and captures market share, not by one-upping the dominant players, not by outdoing everyone else, but by under-doing the competition. 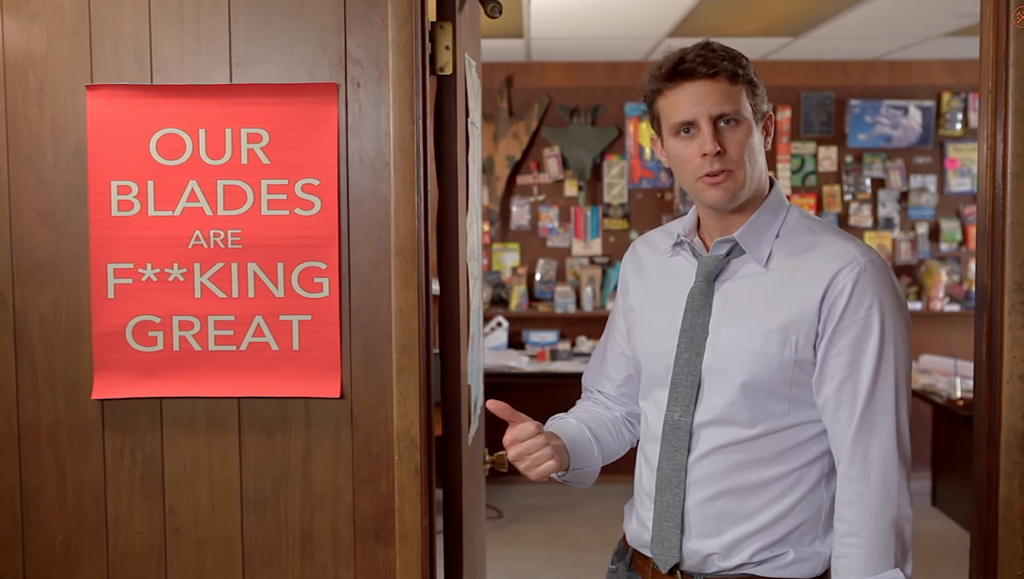 When Dollar Shave Club burst onto the scene, they didn’t say, “YO! SIX BLADES!”

Just the opposite in fact: 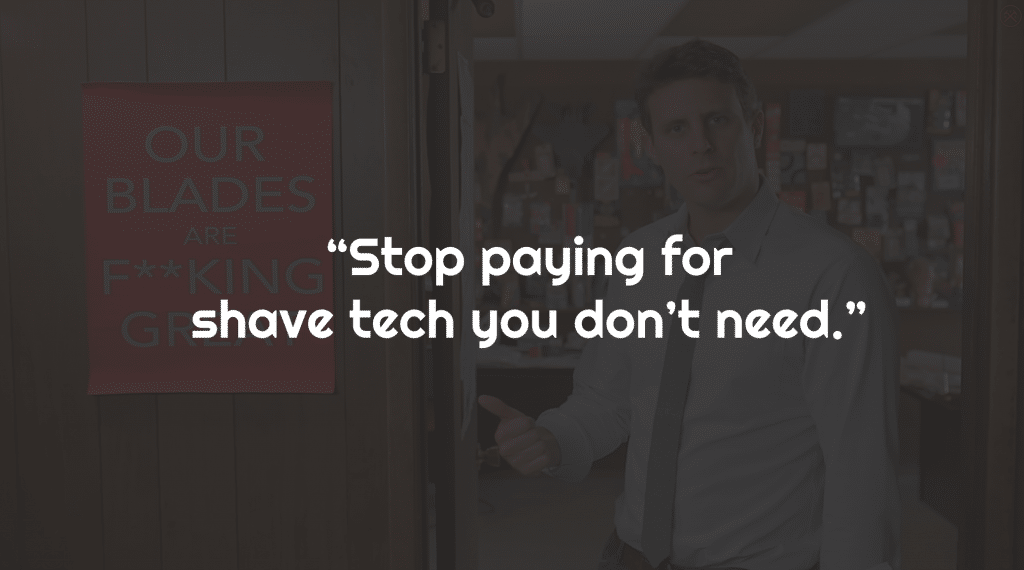 In what was one of the best marketing videos of its time and with some of the most memorable ad copy you can imagine, they said, “Stop paying for shave tech you don’t need.”

Dollar Shave Club is the red line, finding product-market fit with functionality well below what the incumbents are offering.

If you’re the little guy and you’re looking up at a dominant competitor, ask yourself:

“What are my competitors over-doing? What did they add to their flagship offering that they pitched as a monumental breakthrough, but their customers barely noticed?”

As the big guys start to see diminishing returns with each new product release and if their once elegant and simple offering is starting to resemble Microsoft Word’s menu bar … they might be ripe for disruption.

In another post, I describe the process for figuring out which of your customers’ needs are under-served.

To discover if a disruptive strategy would work in your market, look for the opposite of what I describe in that post:

If you’re able to, meet those same needs at a lower cost with less features, less promises, and less complexity to win customers over-paying for tech they don’t need.

Never Ask Your Customers: Would You Use This?

“Would you use this?” is probably the worst and most expensive question you could ask a customer.

You Need a Plan, Just Not a “Business Plan”

If you’re early stage and small, take advantage of those strengths with an equally small and nimble business plan.

Understanding the difference between these two types of risk should change how you approach customer research.

Focus On the Problem

One of the most common mistakes people make early on is jumping to a solution too quickly and getting attached.

If you haven’t heard this nugget of truth yet, you will soon: “You’ve got to get out of the building.”

I was a guest on a podcast talking about early-stage startups recently and the host asked: "We know most startups fail, but the number one reason is they don't meet a market need. Why is that?"

Pretend the Stakes Are Low Even If They Aren't

When you're kicking off customer interviews to collect feedback on a design or prototype, one of the most important things you should say is:

In this post, I’ll show you step-by-step how I’ve used the approach described in Tony Ulwick’s book, "What Customers Want" to help my clients get a much better handle on what to build, what to improve, what to leave alone, and what to ignore.

How to Write Jobs to Be Done Example Statements

If you're trying to integrate Jobs to Be Done into your design process, you've probably found yourself looking for some concrete examples of Jobs to Be Done statements to be sure you're on the right track.

Start Over with Simplicity or Reduce Complexity?

I was having a conversation with a client recently and they’d more or less come to the conclusion that they needed to do a hard reset on the company and rebuild their application.

Using a Kano-based survey, you can avoid false positives (“Oh, sure I'd totally use that!” ... never uses it) and identify the features your product actually needs to have to satisfy and delight your customers.